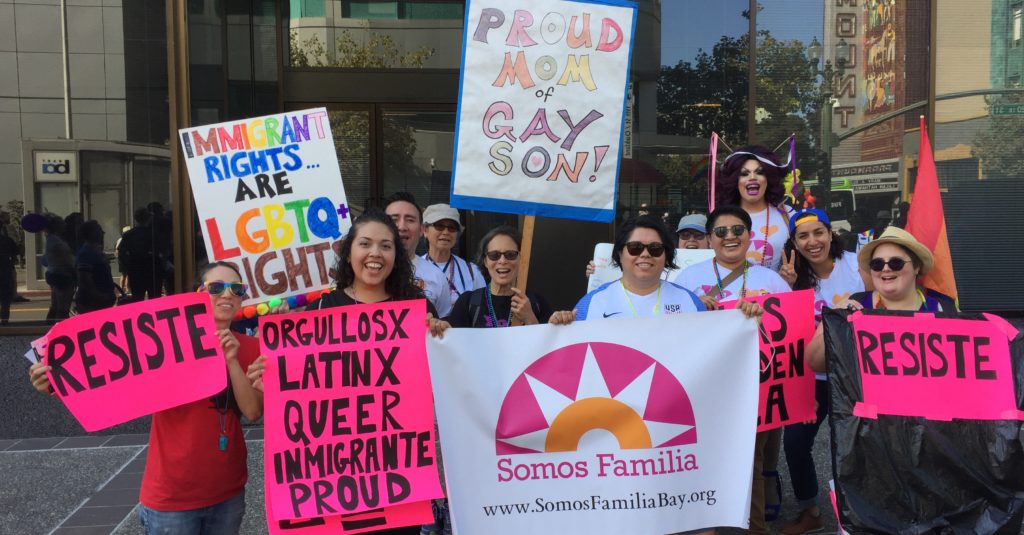 About Somos Familia: Somos Familia is a nonprofit based in Oakland that serves as a support group and resource center for Latinx parents with LGBTQ children. The organization was founded in 2007 by two mothers seeking to educate themselves about the experiences of their gay and bisexual children who had recently come out. Eleven years later, Somos Familia has created an array of educational resources in Spanish including the animated web series, Entre Nós. They facilitate individual conversations with Latinx parents and hold workshops to educate and foster the acceptance of LGBTQ people within the Latinx community.

Mirna Medina, co-founder of Somos Familia came to the United States as a young teenager. Originally from Salvador, she has always being an activist, working with the Salvadorean community and defending human rights. A mother of two, she recalls always having many friends of different backgrounds and orientations. But things changed when she found out one of her sons was bisexual.

“When I found out my kid was bisexual, at first it was very difficult to understand. In my community and family, [there] was still a lot of prejudice and homophobia. I belonged to that community and family, and even though I was open minded, I was still part of that. My level of knowledge was very limited. But it was kind of the call for me to do more than just be respectful of others” Mirna says.

Mirna reflects back on the experience of understanding that she was the mother of an LGBTQ youth. Seeing how many families and communities reacted negatively to LGBTQ people and how much targeted violence there was against out people, scared her and made her decide to actively learn more.

Mirna continued, “Going through this process and starting Somos Familia was key for me to not only learn, but help other families to learn too.” Mirna stresses the importance of being bravely vulnerable. “We need to acknowledge sometimes that we don’t know, so then we can learn.”

Somos Familia started 11 years ago as a support group with just a couple of parents in Mirna’s apartment. What began as a few parents, LGBTQ people, and allies sharing stories, became an organized non-profit with a mission to change culture and communities.

Somos Familia provides a variety of tools and resources for Latinx families. They provide one-on-one support to parents and families, organize gatherings, share research and statistics, and have even developed a novela about a family exploring the process of coming out.

“We created Entre Nos, because Latinos watch novelas,” shared Mirna, who actually voices the character ‘Rosa’ in the novela. “We love dramas. So we said, ‘how do we bring acceptance of LGBTQ in a creative way where the whole family can see it?’ And that’s how we created Entre Nos!”

Since then, Entre Nos has been an official selection at short film festivals. They continue to share the video as tools with parents and families across the U.S.

“It’s really nice when you change an experience with an another parent. You are giving them tools, they are seeing what another person [has experienced]. And that gives hope. Because at the end, we want our kids to be healthy, happy and loved in our life.”

Overall, Mirna sees the work of Somos Familia as not just supporting individual families, but creating mass cultural change. Having more affirming families creates a domino effect of love and support throughout the community.

“In our culture, we are family oriented. We are working on changing the culture in understanding that families have different expressions. When we say ‘Familia es Familia’, when we embrace people for who they are — that’s when change happens.”