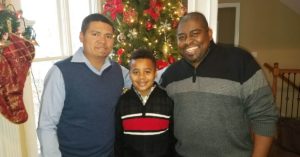 “No one can prepare you for the rollercoaster ride of parenting but our success is based on always considering our son’s needs first. We partner not only with each other but with teachers and other LGBTQ parents and our ‘Village’ to find solutions that work.”

My husband and I live in Snellville, GA, a suburb just outside of metro Atlanta, with our son, Jonathan. Today we celebrated his thirteenth birthday with some of our “Village” that help guide his life along with his birth mother. Life is good now, but these milestones allow us a space to reflect on our journey to be Fathers that started 16 years ago when we first initiated the serious discussion of family-building. Unlike our heterosexual counterparts we don’t encounter the unintentional pregnancies or unplanned parenthood. LGBTQ families like ours are intentional, created from an unwavering pursuit of parenthood.

Family building and support resources have definitely improved from the time when we were researching our options back in 2001. Back then we hadn’t encountered any LGBTQ families of color and much of our process involved deep individualized research mostly via the internet and the old-fashioned “message boards” to obtain information. We were guided to the process of “foster to adopt” under the guise that there were “so many children in the foster care system needing homes” and we knew we had both the home and the love to offer so we started the necessary MAPP (Model Approach to Partnerships in Parenting) training required to be foster/adoptive parents offered by a local agency.

Upon completion of the classes and gaining certification we enthusiastically started attending “adoption parties” where we could be introduced to various kids ready for adoption. The events were awkward and unsettling because there were many prospective adults invited to interact with the kids in the hopes of a match occurring. At one event we bonded well with two vivacious and lovable brothers (age 4 and 6) who didn’t seem to care about our family structure. We hadn’t thought about a sibling group but when we got home they both made such an impression on us that we petitioned for their adoption. Our bubble was deflated later that week when their social worker and foster mother decided in their best interest that “they were best suited to be adopted by a family with Mother and Father figures”. Disappointedly we pressed on and after two more failed attempts with other kids and being told the same thing we were almost defeated, until we decided to pursue the private adoption process.

Upon completing the necessary application and interview process with the private agency we sat back, expecting to wait many months for a potential match. We were pleasantly surprised when the agency contacted us after one week! We followed up immediately and found out that a birth mother had selected us and was scheduled to give birth the baby who could become our son in one month.

I remember the excitement as we started the “fun part” of baby-shopping. Shelton especially was in heaven shopping for all the cute outfits! Our adrenaline was kicked up a notch when we were notified that our birth mother was admitted to the hospital in Louisiana because she was in labor and the “one month due date” that we were told previously was actually supposed to be “one week”! The next 12 hours were a blur as we somehow completed the baby’s nursery, packed and sped to Louisiana excited and anxious that our dream was about to come true! But not without more bumps in the road…

We weren’t prepared for all the protocols and rigorous security checks needed to enter the Military hospital where our son was being birthed. His young birth mother was in the Army and had been serving a tour in Iraq when she became pregnant and was discharged back to the USA on maternity leave. Our biggest opponent was the hospital’s head social worker, a woman with a memorable scowl of disapproval. She evidently was not notified of our intent and made it clear after calling us into her office that she “did not approve of this situation and was not having this in her hospital.” She and the attending obstetrician made it their duty to put a stop to our adoption and made our 2 days in the hospital an emotional nightmare.

We had to have our lawyers intervene with a cease and desist decree which apparently was difficult under Military laws. Nonetheless, we were able to be present at his delivery to witness his entrance into the World but we were ushered out the delivery room quickly after that as the social worker continued her hurdles to ruin our intimate moments. I remember the tears and anxiety as we paced the waiting room and halls thereafter unsure about our “agreement” with his birth mother. The doctors and social worker placed a lot of psychological stress on her in attempts to have her change her mind about her adoption plans — from psychological counseling to forced breast feeding and bonding with the baby to making her name him (even though she had approved of us naming him). As fate would allow we discovered an ally in one of the nurses (a lesbian who understood our plight). She permitted us access to the patient room (most likely against the doctor’s orders) where I remember holding him for the first time and feeling his tiny hand grasp my finger. I remember Shelton feeding him formula and rocking him while looking back at me with joy and tears in his eyes. This was our son and we were determined to fight for him.

On discharge day she had arranged that we take him straight from the hospital to avoid the sorrow that occur with birth mothers. This was swiftly shot down as the staff informed her that she had to be escorted out of the hospital with the baby. Imagine the scene: sobbing birth mother holding her newborn child and being pushed in a wheelchair down the hallways and elevators and out the hospital main door while we walked solemnly behind her holding our breaths and then made to do a “hand off” in the parking lot…

The ICPC (Interstate Compact on the Placement of Children) agreement and other Louisiana statutory laws ensured that we had to stay in the state with our newborn son and couldn’t travel home for 30 days. We found an extended stay hotel that was financially affordable for us for a month’s stay but it wasn’t what we envisioned our first few weeks with our son would be like. Nonetheless, we stayed positive and made the best of bonding with him. I learned how to change diapers, burp baby, etc. very quickly. My husband was a pro as he had raised other younger nephews and nieces unlike me. We anxiously waited for the call from our lawyers to alert us that his birth mother had signed her voluntary surrender of rights and we were free to head home. We packed in lightning time and headed home to GA to be greeted by supportive friends and family waiting to see our new bundle of joy.

Fast forward 13 years to present and we have encountered numerous challenges and triumphs that come with parenting thus far. No one can prepare you for the rollercoaster ride of parenting but our success is based on always considering our son’s needs first and partnering not only with each other but with teachers and other LGBTQ parents and our “Village” to find solutions that work. We have come to realize that the storybook, picture-perfect views of raising one’s child aren’t realistic and there will be mistakes and things that you can’t change about your child. But this is what makes the art of parenting so beautiful and special.

Christopher Inniss and Shelton Stroman reside in Snellville, GA with their 13 year old son, Jonathan, where they own a local pet daycare and boarding facility.

Inniss, a small animal Veterinarian, is a native of Guyana in South America, but grew up in the islands of Jamaica and Barbados before immigrating to the United States to pursue his studies and career in Veterinary medicine. Shelton grew up in Rockingham, NC before moving to Atlanta, GA to attend College. The two met through a mutual friend 17 years ago who saw a possible connection between the two after noticing their homebody tendencies. A match was inevitable and the two soon plotted out a course for their future that included family planning.

After a few years of failed state adoption and foster care placements the two achieved their dream of fatherhood via the private adoption process and their son, Jonathan, was born. Soon the couple realized that their pursuit of happiness would be hampered by legal equality roadblocks and discrimination that prevented LGBT families like theirs from being fairly treated and recognized. In 2014 their family lead a class-action lawsuit (Inniss v. Aderhold) seeking to overturn Georgia’s constitutional amendment that defined marriage as an institution between one man and one woman.

The federal challenge marked a significant step for LGBT families living in the Peach State, where voters overwhelmingly approved a 2004 ban on same-sex nuptials and the suit catapulted the couple into the forefront of numerous media attention. Most recently, the family concluded a year-long filming production for an upcoming web series called “Pops” profiling real Black Fathers. In 2015 the Supreme Court of the United States ruled that Marriage Equality was the law of the land and a year later the couple was finally legally married.