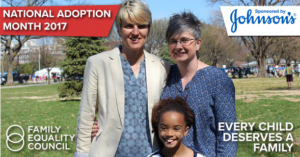 “When we adopted, Ginger was listed on the home-study as my ‘roommate’ and legally, I was the parent that was adopting. It wasn’t until same-sex marriage became the law of the land, some 8 years later, that Ginger was able to also legally adopt our daughter.”

As we prepared to start our family through adoption in our home state of Alabama, we ran into many dead ends. Several adoption agencies turned us away because we were a same-sex couple. Other agencies turned us away because we were an unmarried couple, despite same-sex marriage not being legal at the time. Because of the difficulty in finding an agency willing to work with, we honestly felt that our dream of becoming parents through adoption wasn’t a possibility.

We were thrilled when we finally found an agency willing to facilitate our adoption. However, we had no idea that the wait would take so long. This wait certainly tested our patience and once again we thought our adoption might not be a possibility.

After many years of waiting, we finally received THE phone call. In an instant our life was forever changed. Although we had been waiting for many years, when we received the phone call from our social worker telling us about this baby girl, we weren’t truly prepared. We had to make several frantic trips to the baby supply store to purchase the most needed items.

Our adoption was domestic, in-state. We knew that a domestic adoption was right for us because we wanted to adopt a child from birth. Because of our work, we also would not have been able to spend considerable time in a foreign country, as was the case with many international adoptions. We used a private agency that was not religiously affiliated and our social worker was helpful, respectful, and understanding. Our daughter was placed in our arms when she was 3 days old following her discharge from the hospital. There were medical concerns and situations that we had to consider but we knew right away that we would be bringing this child home to us.

Our adoption process, for the most part, went pretty smoothly. We were grateful to find an agency that was willing to work with our situation. Ginger was listed on the home-study as my “roommate” and legally, I was the parent that was adopting. It wasn’t until same-sex marriage became the law of the land, some 8 years later, that Ginger was able to also legally adopt our daughter.

We do feel that adoption for LGBTQ people is becoming easier. With marriage equality many gay couples feel more empowered and no longer have to hide their relationship status as they move through the adoption process. Social workers and adoption agencies that truly serve the needs of children do not make the process impossible, rather they embrace all individuals with the desire to become parents. Many states, my home state included, have created religious exemption bills that can legally deny couples from adopting through religiously-affiliated adoption agencies. Despite these roadblocks and hurdles, when LGBTQ individuals are connected with agencies that are fully inclusive, the adoption process is more accessible now than ever before.

My advice for others considering adoption is to be patient. While some of the barriers have been removed, the adoption process itself is long, tedious, and even frustrating. There are many ups and downs throughout the journey, but at the end it is worth it all!

April Aaron-Brush joined Family Equality Council’s Southern Advisory Council Board in 2014. Born and bred in Alabama, April and her wife Ginger are plaintiffs in a lawsuit seeking marriage equality. April earned her BBA and M.Ed. from the University of Montevallo. She currently works as a technical expert with the Social Security Administration. In her free time April enjoys urban chicken farming, working in the garden, and spending time with family. April, Ginger, and their daughter Avery reside in Birmingham. In addition, April and her wife Ginger run Birmingham Gay and Lesbian Parents, a non-profit group supporting LGBTQ parents and their children in the Birmingham area.