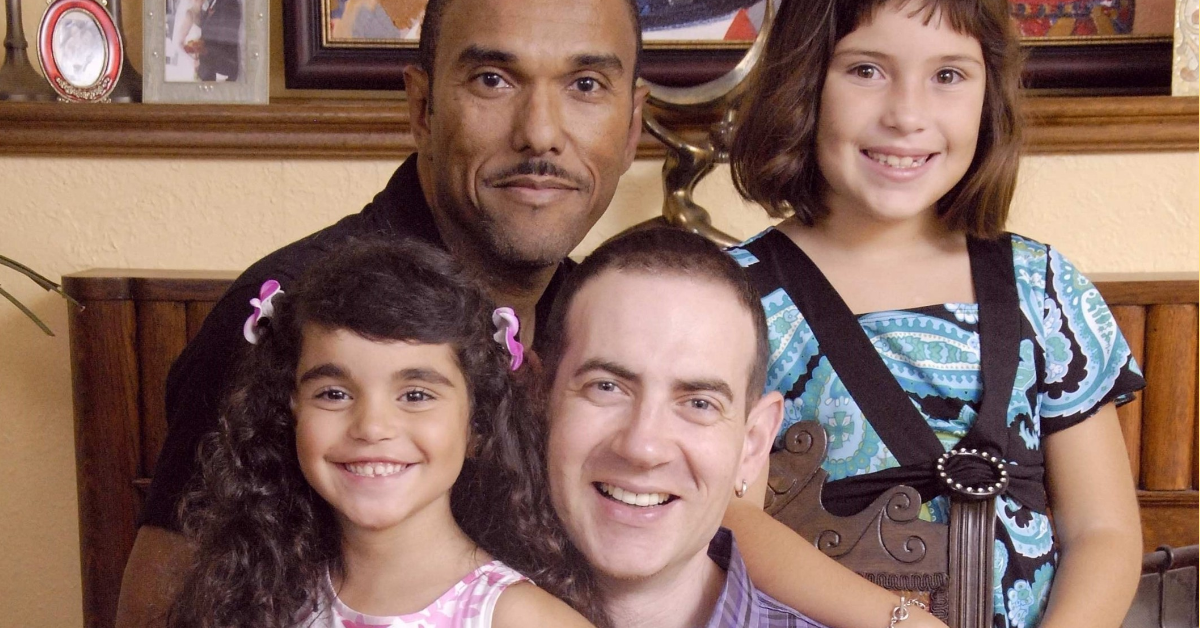 Sunday, May 3 marks International Family Equality Day, a time to celebrate family diversity in all its forms. To highlight this special day, we’ve asked a long-time supporter of Family Equality, Lane Igoudin, to share his family’s unique experience as a multi-lingual, multi-cultural home.

If you listened in on the sounds of our house, you’d hear a variety of languages.

There’s English, most of the day. But when my family calls, I switch to Russian, often throwing in some juicy Yiddish expressions. Then, we jump to Spanish when our daughters’ do their Spanish homework—we can do it together since I speak it relatively well. Conversely, when I ask for help with my Hebrew homework at American Jewish University, my kids step in.

This mix of cultures—mainstream American, African American, Jewish, Latino, and Russian —creates a vibrant home, at the center of which is love and acceptance of one another and of our backgrounds.

Since we met 23 years ago, my husband Jonathan and I have committed to bringing our heritages into our family. Our differences have provided us with a lifelong opportunity to learn about each other’s cultures, living them out instead of suppressing them. If Jonathan wants to cover our house—inside and outside—in Christmas cheer, it is fine with me. And, if it’s important for me to celebrate Shabbat every Friday with prayers, candles, and traditional blessings, we all join in.

We adopted our daughters when they were small from the public foster system here in California. As we raise them, we’ve passed on our cultures, grafting them onto our lineages and giving them roots that go back many generations. It makes us stronger as a family, and it looks like…

…Watching our daughters read from the Torah before our Conservative congregation, friends, and family at their bat mitzvahs. This was the culmination of their years of learning Hebrew and the Jewish liturgy and traditions, but also of our support, including the not-so-easy task of getting them to the temple school on time, which Jonathan would make certain.

…Building a Christmas tree in our living room to the sound of gospel music each year at Christmas. Jonathan would finish it with an exquisitely carved black Christmas angel, a symbol of his own heritage. When our daughters were really little, a visit with Santa was a must too.

…And making chile verde enchiladas, a part of Jonathan’s family tradition as his mother grew up in El Centro, on the U.S.-Mexican border. There, both Chicanos and African Americans shared the neighborhood and the recipes. Through Jon’s enchiladas, arpilleras on their nursery walls, Spanish in pre-school and now in high school, ballet folklorico shows, and the Day of the Dead processions, we have hoped to impart in our daughters, who are both part Latina, a connection to the Hispanic culture.

Growing up, I could not possibly imagine a future with a legally married husband and two kids. When I was child in the Soviet Union, homosexual relations were a crime punishable with up to 5 years of hard labor in prison. After the collapse of the USSR, the newly independent Russia rescinded the infamous law, as did other post-Soviet countries, but the situation for many LGBTQ people there remains precarious at best, dangerous at worst.

International Family Equality Day, celebrated around the world on May 3, is a reminder that all families, regardless of their sexual orientation, religious, ethnic, or cultural background, identity or gender expression, deserve full respect and equal rights. No families must be excluded or treated differently.

We can help the fight for family equality by being visible, by sharing our stories, by supporting the groups and organizations that advocate for our families like Family Equality, by reaching out to other community groups and politicians willing to be our allies, but also locally, by engaging with school systems.

In some ways, our fight for LGBTQ+ equality is another part of our “heritage” that we hope to pass down. Just as Jonathan and I teach our daughters family recipes or traditional holidays, we work to ensure that their annual public school registration forms contain gender-neutral language. We submit our testimonials to be included in amicus briefs filed by Family Equality, alongside ACLU, in two current cases protecting family equality in the U.S. There, our story counters a license to discriminate against LGBT parents in public adoptions with an example of a multiracial gay family in which adopted children thrive, in no small part due to the spiritual foundation found in religion.

In this and in so many ways, our home is a place not only of different faiths, identities, and cultures—but of a deep, vibrant, and unconditional love. And I wouldn’t have it any other way.

Lane Igoudin, M.A., Ph.D., is a writer, professor of English/ESL at Los Angeles City College, and a recent Andrew W. Mellon Fellow with the EPIC – Humanities Division at UCLA. His memoir DISPOSITIONS: Two Fathers, Two Babies, and a Trial That Made Them a Family (under contract with University of Wisconsin Press) recounts his and his husband’s children’s rollercoaster adoption from the Los Angeles County foster system, and their transformation through parenting. www.laneigoudin.com