Our biological parents divorced when my brother was three and I was in diapers. When I was three and he was four our mother expanded our definition of family to include Pat. In 1977 same-sex marriage was a distant dream, but married they were, legal or not. Now, forty-something years later, they are still together.

There weren’t a lot of lesbian families in upstate New York back then. My mother did have one friend with a son, but we only saw him every few months. Most of her friends were childless. There was a girl at school whose mother was also a lesbian, but our mothers weren’t friends, she was popular and I wasn’t, and I just didn’t know how to make friends with her. The only kid who had lesbian parents that I saw frequently was my brother.

Matt and I were playmates and competitors. We fought every day until I was nine and he was ten, at which point we evolved into more than merely allies or friends—it became Matt and me against the world.

We were the only ones who knew what it was like to have lesbian parents and a dad far away in Alaska. He alone knew the scratch of our father’s carpet as we lay on the floor to watch TV on summer vacations, or the smell of dirt in our mothers’ backyard. He and I ran away from bullies together after school. Matt and I fastened seatbelts side-by-side to fly unaccompanied to visit our father. Back in New York, we mouthed the same lies about Mom and Pat’s relationship. In another family we might not have been so close, but we were twin-like, inseparable.

My brother’s first grade teacher asked my mother about her third child named Laramie. There was no third child—it was only that my brother’s stories were all about Lara-n-me. One identity. Later, in high school counseling sessions I was told that I needed to speak in terms of “I” instead of “we” when I spoke of my upbringing. But in my mind, my brother and I were conjoined. What happened to me happened to him, and vice versa. 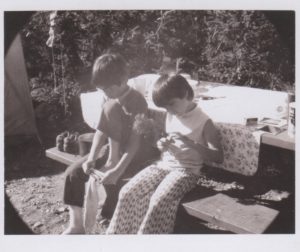 I often wonder if we had had a different sort of family, one out of the closet with active participation in a queer spawn community if we would’ve been as close. I don’t spend much time thinking about it though. As my brother and I move into parenting our own children and meeting up at Nana and Grandma Pat’s house a few times a year, I’m grateful that we have remained close. I love to see my brother’s sons playing with my own boys, and know that they are growing up in a radically different world.

Matt and I can talk about parenting on a level that is different than that of my mom friends. We both know our shared history and how it shapes how we raise our children—what fears linger and what causes we fight for. Our conversations cut to the meat quickly and concisely, and I’m glad we’re entering this next stage together.

Lara Lillibridge is the author of two memoirs: Mama, Mama, Only Mama, and Girlish: Growing Up in a Lesbian Home. She co-edited an anthology, Feminine Rising: Voices of Power and Invisibility with co-editor Andrea Fekete. Lara Lillibridge is a graduate of West Virginia Wesleyan College’s MFA program in Creative Nonfiction. When she’s not writing, Lillibridge can be found shivering in a hockey arena or getting sunburned at the baseball field. She still doesn’t vacuum very often, but luckily she’s nearsighted enough not to notice.